“By worship of the Lord, who is the source of all beings and who is all-pervading, man can, in the performance of his own duty, attain perfection.”

Purport: Thus the brāhmanas, ksatriyas, śūdras and vaiśyas must execute their prescribed duties as these duties are stated in the śāstras. In this way everyone can satisfy the Supreme Personality of Godhead, Vishnu. The king, or government head, has to see that the citizens are thus engaged. In other words, the state or the government must not deviate from its duty by declaring that the state is a secular one, which has no interest in whether or not the people advance in varnaśrama-dharma.

Today people engaged in government service and people who rule over the citizens have no respect for the varnāśrama-dharma. They complacently feel that the state is secular. In such a government, no one can be happy. The people must follow the varnāśrama-dharma, and the king must see that they are following it nicely.

The king is supposed to be pious in whose state and cities the general populace strictly observes the system of eight social orders of varna and āśrama, and where all citizens engage in worshiping the Supreme Personality of Godhead by their particular occupations.  SB 4.14.18

As stated in Bhagavad-gītā (5.29): bhoktāraṁ yajña-tapasām. Krishna is the ultimate purpose of all sacrifice. He is also the enjoyer of all sacrifices; therefore He is known as yajña-pūruṣa. The word yajña-pūruṣa indicates Lord Vishnu or Lord Krishna, or any Personality of Godhead in the category of vishnu-tattva. In perfect human society, people are situated in the orders of varna and āśrama and are engaged in worshiping Lord Vishnu by their respective activities. Every citizen engaged in an occupation renders service by the resultant actions of his activities. That is the perfection of life. 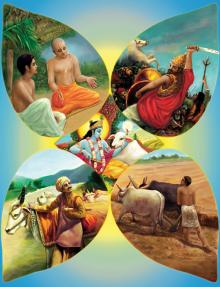 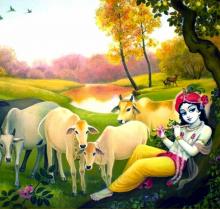