Reviews and Quotes from MODERNITY is KILLING CIVILIZATION

In Modernity is Killing Civilization /Bhakti Raghava Swami presents us with a manifesto for educational, economic, and social reform, based on his profound insights into the timeless Vedic wisdom of India.

As the world rushes toward ever-increasing urbanization with its inherent destructiveness, Bhakti Raghava Swami invites us to examine a set of principles and practices gleaned from a long Asian tradition of village culture broadly referred to as "Vedic", as a valuable resource for re-envisioning and implementing village life as a viable alternative.

That we have become a killing civilization should be obvious to all. The number of unborn children killed daily through legal and illegal abortions, the number of animals and aquatics slaughtered in thousands by the minute, the number of trees uprooted every day, the number of global daily suicides (in India alone a farmer takes his life every thirty minutes), and the list goes on, it is simply mind staggering to say the least. With the help of modern technology, we are now keeping on-line second by second statistics of these ever-rising figures for the whole world to witness, known as the “Kill Counter” page5. Yet the killing business continues!

Modernity is Killing Civilization seeks to unravel the plight of modern man’s current narrative by scientifically presenting the Vaisnava Vedic perspective of society (Vedic Sociology). I address three pressing problems commonly found in most developed and developing countries, with a special focus on India. These three main areas of interest relate to three Vedic sciences described in Kautilya’s Arthashastra44, namely 1) Varta (the Science of Economics), 2) Danda-Niti (the Science of Politics) and 3) Trayi (the Science of Enlightenment), as they negatively affect the socio-economic and cultural condition of communities when managed irresponsibly.

Unless scientists, educators, scholars, Heads of State, private agencies and Faith Based Organizations recognize our present lacuna, the on-going decadence in the matter of economy, social governance, and education will continue to spiral downwards to unimaginable and irreversible chaotic levels.

With the advent of the industrial revolution, mechanization and globalization, and the forward march towards ever-increasing materialism since the last 400 years, we find ourselves in an unsettling situation. Modernity has clearly carved our destiny towards an ever-increasing materialistic and complex urbanized living condition as opposed to the more traditional, natural, simple and less materialistic rural lifestyle.  Although we presently experience multi- directional life-threatening global crises and calamities, largely due to our excessive and insatiable exploitation based on lust and greed, our “voluntary” return to a more simple and traditional lifestyle, regarded by most as antiquated, regressive and primitive, seems highly unlikely and improbable. We seem to have thrown ourselves in a trajection of no return.  Although we have some understanding of ourselves having created such an unsustainable living condition, the many attractive features of this new found liberty and freedom have heavily conditioned us and we are not about to change direction although many know, or at least sense, that we are on a suicidal path. Many will agree that we have gone to the extreme of humanism or materialism that is soon to reach its apogee. 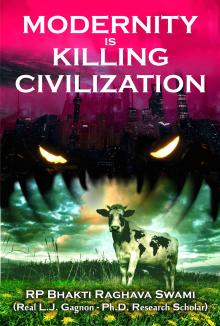