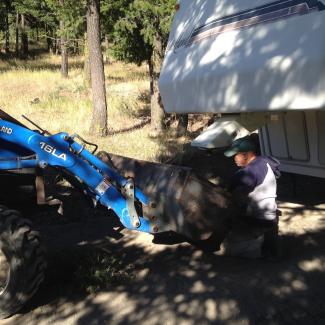 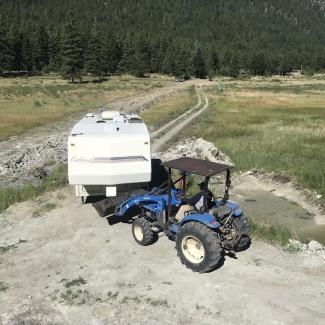 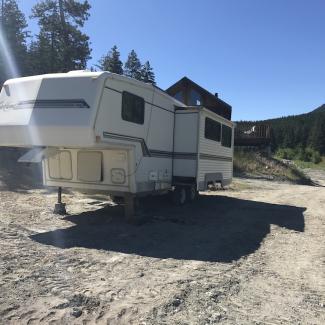 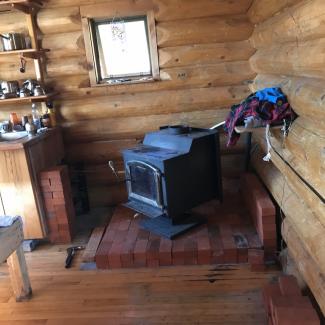 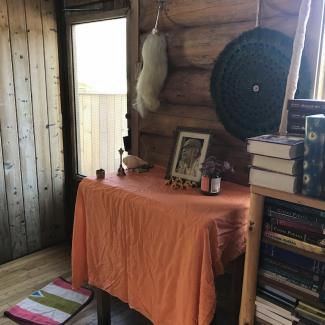 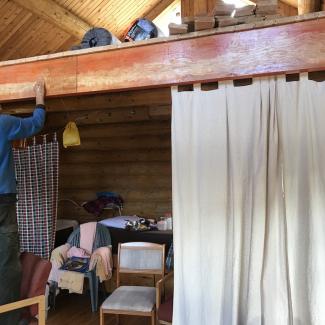 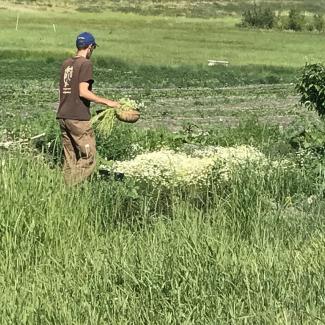 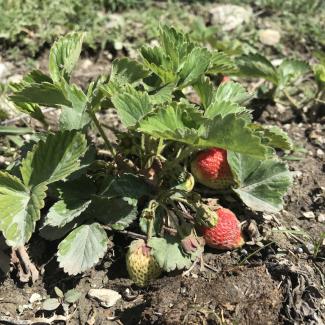 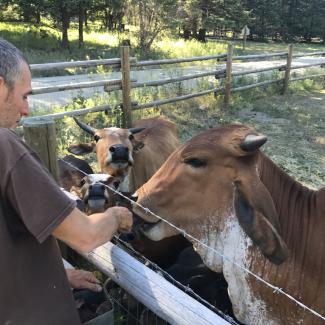 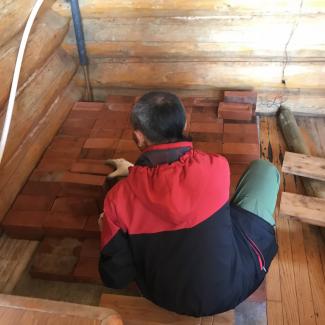 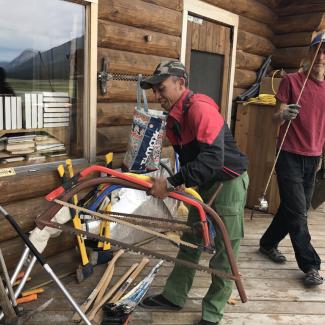 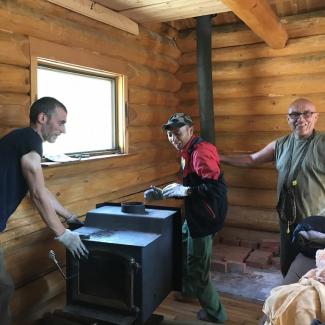 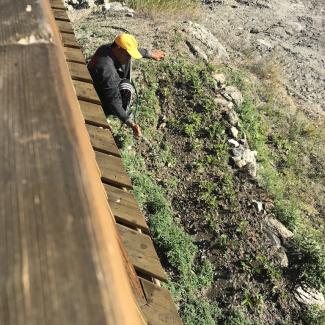 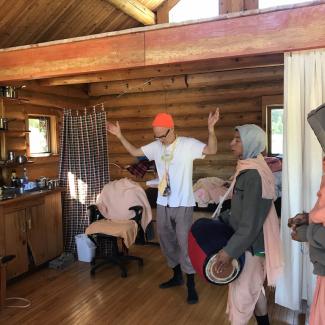 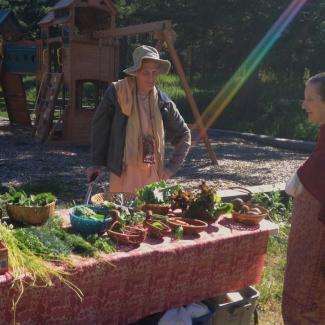 This week we setup a new home for our new Eco Village participants from Indonesia.  Bala Krishna prabhu laboriously moved the trailer using his tractor, a process that took half the day.

Our two devotees from Indonesia, Kisora Krsna prabhu and Danavir prabhu, arrived in Vancouver on Thursday June 22nd and after spending that day at the ISKCON Burnaby temple took a bus to Cache Creek where Ramanath prabhu picked them up. They were shown to their new residence, a trailer conveniently placed near the log cabin. The very next day they were helping with some of the renovations taking place in the log cabin. The renovations included taking out the old bathtub (must have weighed 200 pounds or more) and shifting the wooden stove from its the south-west of the cabin to the south-east of the cabin. By the end of the day the yajna was completed and the devotees could finally rearrange the interior to give it more of a temple atmosphere.

We attended the launch of the new "Village Exchange" where Saranagati Villagers are encouraged to bring fresh produce, goods, clothes or anything else they want to trade. About ten devotees dropped by the Village Exchange booth and all the produce quickly left the table. This will now become a weekly event, every Thursday in front of the Surabhi Goshala beginning at 5:00 PM.

Saturday morning, June 24th, marked the first morning program in the South Cabin. After Mangala Aratik that was attended by our devotees from Indonesia and Bhakti Raghava Swami, Daivata prabhu joined for the Japa sessions, the Bhagavatam Class and the Guru Puja. Our first full morning program was conducted on Sunday the 25th with the following devotees in attendance: Kripaniddhi prabhu, Daivata prabhu, Kisora prabhu, Danavir prabhu and Bhakti Raghava Swami. The program included Mangala Aratik, Narasinghadeva prayers, Tulasi Puja, followed by Srimad Bhagavatam and Guru Puja. The devotees discussed what would be the ideal time for the morning program and came up with the following tentative schedule:

Since the arrival of our two devotees from Indonesia there has been quite a bit of activities that involved relocating the temporary library, removing the chimney from the rood of the log cabin, setting up a Pancha Tattva altar, a small altar for Srila Prabhupada and removing all the tools and other debris from the front deck. Both the inside and outside of the Log Cabin has suddenly become more spacious.

In the coming week work in the Gurukula Colony will begin involving measurement of the 36 plots, general cleaning and landscaping, in addition to getting material for both the proposed toolshed and the greenhouse. 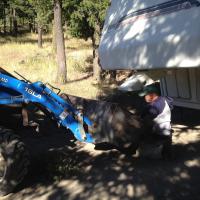 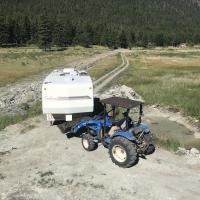 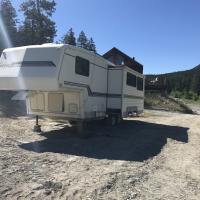 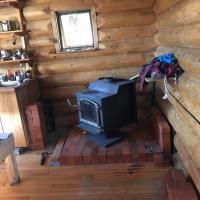 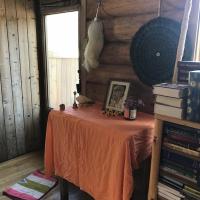 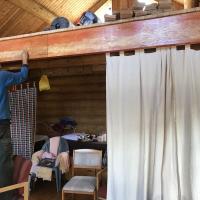 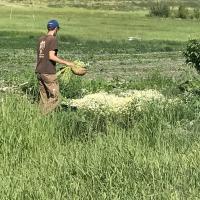 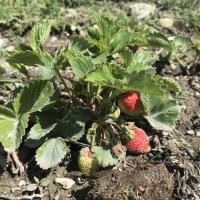 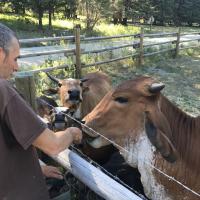 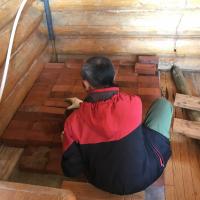 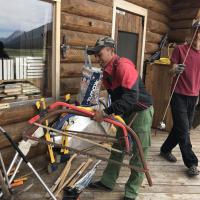 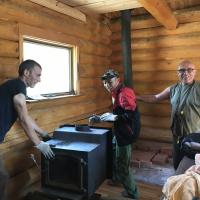 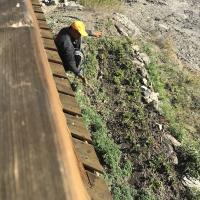 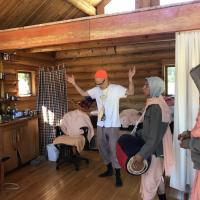 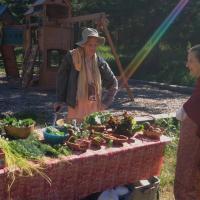