The Gurukula will have daily morning practicals that will include cleaning the asrama, cow care and agriculture. Memorization of verses and learning to perform yajna will be major courses. Students will have regular pilgrimage tours and weekly Harinam in local villages.

"Traditional education is practically a thing of the past, something that most of us have never even seen, what to speak of experienced. We are generally ignorant of what it is. The modern academia speaks about it in negative connotations. Traditional education is presented as outdated, backward, irrelevant, and even prejudiced. In the most polite of cases, it is considered to be primitive civilizations’ early attempts at education, which eventually led to our “glorious” academia of today—which supposedly reaches heights that were never achieved before. Most of us who were molded by today’s modern education were exposed to such propaganda, to some extent. Our modern conditioning influences us and makes us (even devotees) apprehensive of traditional education." (Traditional Education, HH RP Bhakti Raghava Swami)

Some of the needs and activities of Youths and Young Adults include: 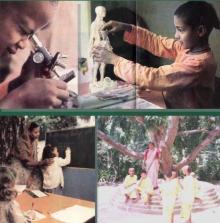